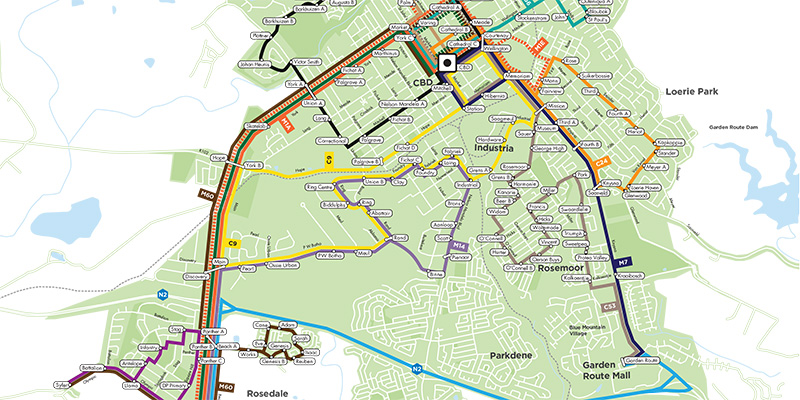 After several rounds of refinements to the routes that make up the first three phases of the GO GEORGE public transport system, a route map depicting the system as it currently stands, has now been finalised and will be put up in buses and included in communication and printed information about the service.

“We could not spend money on printing and putting up any maps before reaching a certain level of stability on the routes rolled out to date,” says James Robb, GO GEORGE Manager. “With the map in the buses and timetables in hand, however, we knew all along that understanding the system and planning their trips would be so much easier for our passengers. Although we always keep our ears on the ground for changing passenger needs, these routes should basically stay the same.”

According to Robb, the stability of the system now allows for several applications that will make using the system easier for passengers. A handy pocket timetable guide is currently being printed, and routes and timetables will be put up on the pole collars at the bus stops. “We should start with the application of the relevant route map and timetable for every bus stop within the next week. We’ll start out with the transfer bus stops at first, and fill in the rest. This is a mammoth task since every bus stop’s map and timetables are unique,” he says.

For any enquiries about the bus service or for assistance with trip planning, call the GO GEORGE Call Centre at 0800 044 044 where well-informed customer service agents are available from 05:00 – 21:30 daily. All route maps and timetables are also available here.