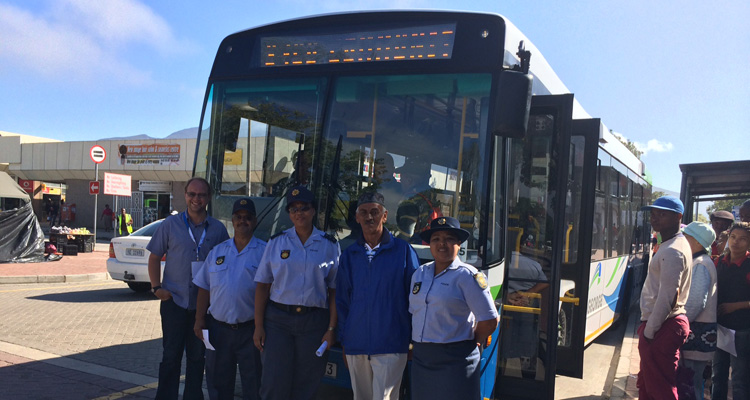 Five uniformed SAPS officers boarded buses operating on the newly launched Blanco GO GEORGE route, where they interacted with members of the public. They used the opportunity to hand out leaflets to passengers, and answered questions about law enforcement efforts.

“The Municipality appreciates this initiative by the SAPS as well as their interest in and involvement with GO GEORGE,” said Executive Mayor of the George Municipality, Alderman Charles Standers.

“One of our biggest goals is to keep George safe. For this reason, today’s presence of SAPS officers on our GO GEORGE buses was so welcome.”

The operation was initiated by the SAPS’s Colonel Michael Taylor, with the aim of creating awareness among passengers about the role of the SAPS in the community, as well as the safety of passengers on public transport in general and GO GEORGE in particular.

“The safety of our passengers is non-negotiable,” said GO GEORGE Manager James Robb. “As we gradually expand our network to cover the broader George municipal area, we are investing large sums of money in comprehensive driver training as well as a CCTV camera system for all of our vehicles.”

The second phase of the GO GEORGE system was launched at the end of February, linking the communities of Blanco, Heather Park and Heatherlands with the routes already operating in the CBD, out towards Garden Route Mall, as well as Denneoord, Rosemoor and Loerie Park.

Next ArticleGO GEORGE fine-tunes its Rosemoor and Blanco routes