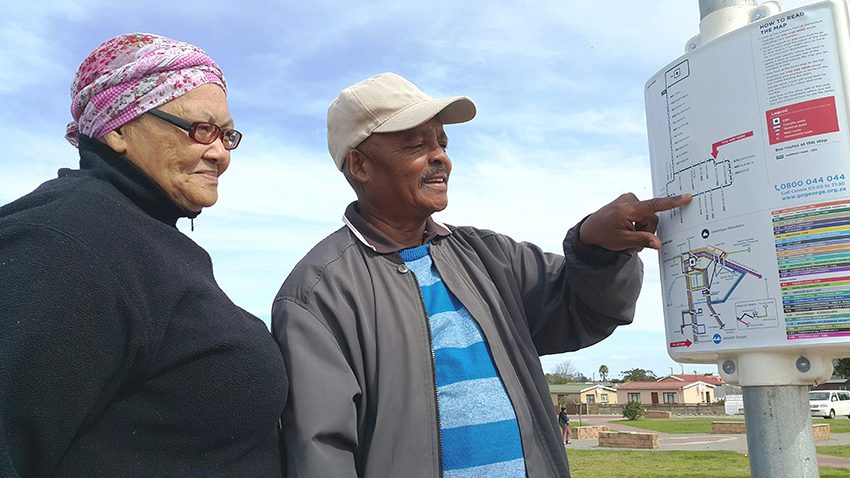 Two delighted GO GEORGE passengers finding their way on the new pole collars at the Beach A bus stop in Pacaltsdorp on Monday. Sarah Sparks from Europe and Eden Kissan from Harmony Park say it was easy to calculate when the next bus will arrive, following the simple instructions on the pole collar sticker.

GO GEORGE has started putting up pole collar stickers displaying route maps and timetables at the transfer bus stops this week. This follows the finalisation of the current bus routes after months of refining and improving routes and schedules to suit passengers’ needs.

“Of course it would have been a whole lot easier for everybody if we could have had this from the start, but the system has only recently reached the level of stability where we feel comfortable to spend money on the design and printing of pole collar stickers,” says James Robb, GO GEORGE Manager.

According to Robb, each bus stop has its own unique set of stickers, displaying the timetables and route maps of only those routes that stop there.  On the one side is a line map of the routes stopping at that particular stop, and a system map giving the passenger an overview of where the different routes run and where they can transfer between routes to reach their destination. A red arrow on both maps indicates that particular bus stop (“You are here”).

The other side of the pole collar shows the complete timetables for all the routes that stop at that specific bus stop, with enough information to calculate when the next bus should arrive. Instructions on how to read and interpret the tables are included and easy to follow.

The timetables and route maps have always been available on the GO GEORGE website, but having them available for everyone to see right at the bus stop, will enable passengers to plan their bus trips better, and even to have an estimated time of arrival of the next bus.

The busy transfer stops are the first to get their pole collars, with the rest to follow soon.

“As the system rolls out to the remaining areas of town, we’ll follow the same procedure of first streamlining and refining those routes, and then finish it off with pole collar information when ready,” says Robb.

Next ArticleHow to ‘read’ a bus