GO GEORGE will be making temporary changes to certain routes to accommodate the Outeniqua Chair Challenge (OCC) on Saturday 15 February 2020.

The impact of this annual event on the bus service is less this year, thanks to changes in the race route with the race village at Carpe Diem School in Lang Street. Following below is a summary of the affected routes.

All scheduled trips on this route, reverse trips included, will operate in the forward direction only, until 12:00. All stops on the side of the street serviced by the reverse route will be closed for the duration of the race.

Due to the closure of Union Street between Meade and York Streets until 12:30, 13 Forward will turn right into Meade Street from Union Street, left into Palgrave, left into York, and right into Plattner Blvd to continue as usual. Route 13 Reverse will follow the same rerouting, just in reverse.

Routes 53 Rosemoor and 53B Rosemoor Express

Due to the partial closure of Park Road in front of Blue Mountain, these two routes will travel via Knysna Road when departing from the Garden Route Mall, turn left into the CTM servitude road and right into Park Road to continue the normal route. The same rerouting will apply to trips from town in the direction of the Mall. Park Road should be open by 10:00.

Delays to be expected

Accommodating the start of the 21-km and 42-km races from the starting point in Lang Street, via Hope Street to the airport road circle, there will be delays on all routes passing through the circle, especially between 07:00 and 07:20.

Due to single-lane traffic from 06:00 along the entire OCC route, from Carpe Diem School to the turning point behind Eden Meander, delays must be expected on all routes, with traffic officers controlling traffic to let athletes pass. York Street from the circle at Unity Park to Churchill Street should be back to normal by 10:00; from Churchill Street to Union Street, single lane traffic will apply until 11:30.

Passengers are advised to take an earlier bus to ensure being on time for work, while GO GEORGE also calls on employers to be understanding and patient, should any workers arrive a little bit late. 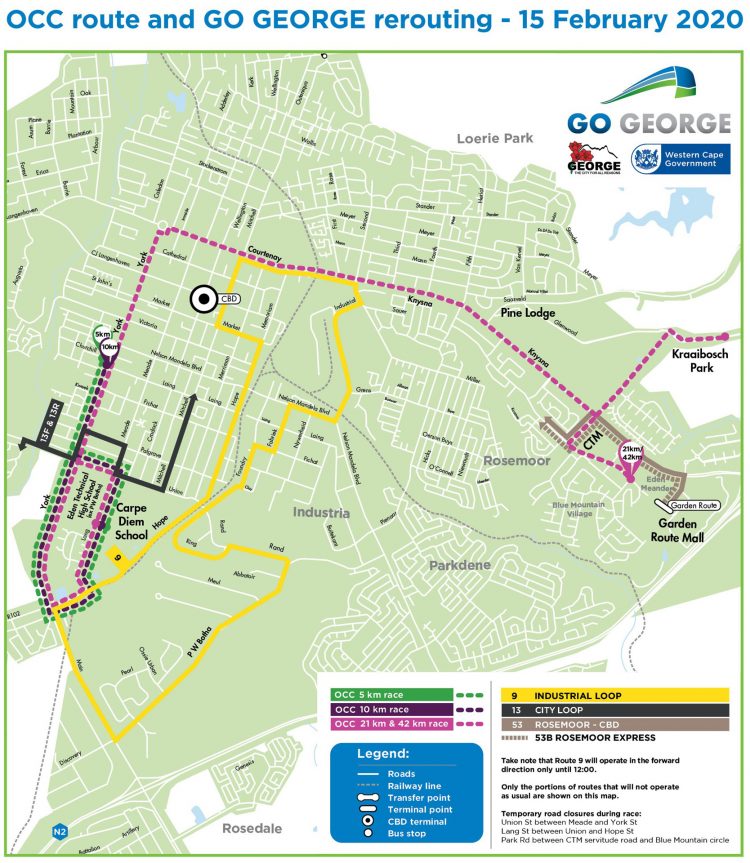 This route map indicates the rerouted bus routes as well as the OCC route that will apply this year.

Previous ArticleIt’s so easy to take a bus to the George Old Car Show!