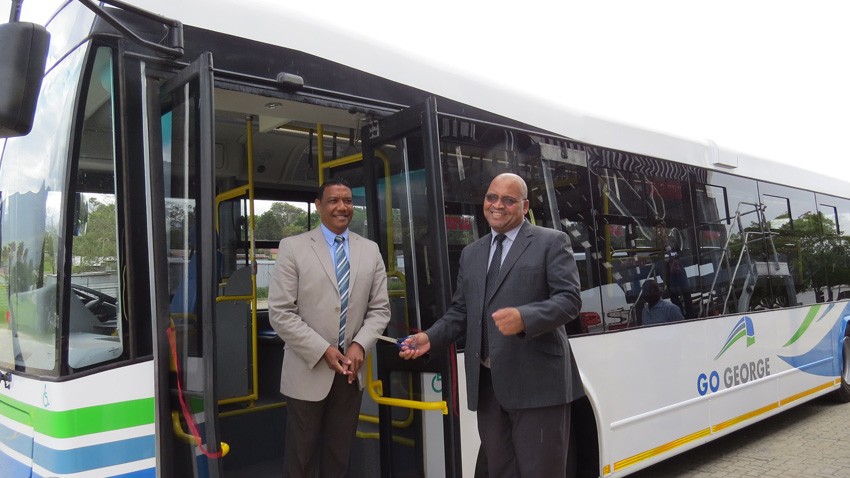 The one millionth single GO GEORGE bus ticket was been sold on the 15th of July – only eight months after rolling out the first buses in Phase 1 to service the residents of Rosemoor, Denneoord and Loeriepark.

“We are overwhelmed and extremely grateful that this long-awaited service is doing so well” says George Executive Mayor, Alderman Charles Standers. “I am very proud of all the role-players, especially on the local side of the project. It is clear why Government has chosen George to be the first B municipality to roll out an integrated public transport network. We have the infrastructure, the skills, the essential managerial component, and a community that has been waiting eagerly for a safe and affordable transport system.”

“I said it at the launch of GO GEORGE last year, and I’m saying it again: This flagship public transport network will change the face and image of our city considerably. It is indeed one of the game changers and catalysts that will not only enhance mobility, but will ignite our city’s economic growth.”

Since December 2014, two more phases have been rolled out, covering Blanco, Heatherlands, Heather Park, Pacaltsdorp and certain routes to the Industrial area. These first three phases are being serviced by a fleet of 64 buses – 39 standard buses (the bigger ones) and 25 midibuses. Another 35 minibuses will join the fleet shortly, bringing it to a total of 99, and enabling the roll-out of Phase 4: Thembalethu, Conville, Borchards and Parkdene.

Next ArticleTake a bus to Tuesday’s rugby at Outeniqua Park