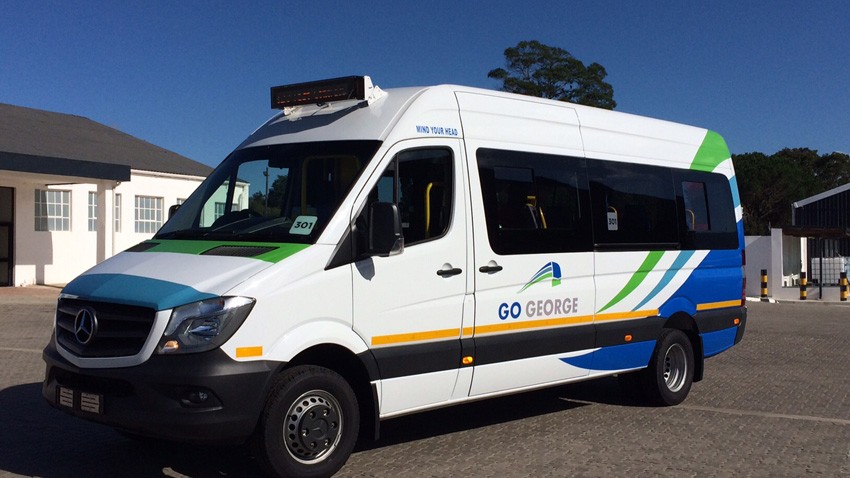 Thirty five zippy minibuses are joining the GO GEORGE fleet of 39 standard- and 25 midibuses on Sunday, 23 August 2015, bringing the number of buses serving the George community to 99.

This addition now enables the GO GEORGE bus service to implement some welcome route refinements to Phases 1 and 2, which cover Rosemoor, Denneoord and Loeriepark, and Blanco, Heatherlands and Heather Park. These will also be activated on 23 August, with Pacaltsdorp’s route refinements following as soon as the refinements to the first two phases prove to be running smoothly.

The Executive Mayor of George, Alderman Charles Standers expressed his delight in the fact that by activating the minibuses, the GO GEORGE bus service will expand and refine its footprint of safe, reliable and affordable transport for all the inhabitants of George, including persons with special needs.

According to James Robb, GO GEORGE manager, the refinements that will be implemented on Sunday will ensure that the system provides enough passenger capacity in the right place at the right time. “Nobody wants to see an empty bus going around and around in a place that has little or no demand at night, but we must still cater for special needs – shift workers, security staff and so on. Now we can start to make the necessary adjustments, using the minibuses in those areas where demand reduces at night. It’s exciting times, for the GO GEORGE team and passengers alike.”

Another factor necessitating route refinements is the expansion of the system, which will require slight changes to accommodate the next phases at places like the Cradock Street interchange in the CBD. “The idea is that buses must stand waiting as little as possible anywhere,” says Robb. “Their job is to move people, not to stand around waiting. As we learn how long it takes for a trip, we can eliminate some of the unneeded bus waiting time, and this can save us buses to use elsewhere. As the system expands, some parts now in action will change a bit to fit with the new services. A good example is that once the Wilderness service starts to operate, it will run via the Garden Route Mall between the CBD and Wilderness. This will change the need for the current CBD – Mall only service.”

Robb says this integration of routes creates new possibilities by creating capacity not previously available. “We know passengers would prefer to be picked up at their doorstep and delivered in front of their destination by the same bus, but once they see that transfers along the route make buses available to run at higher frequency, delivering an even more efficient and cost-effective transport service for everybody, they will understand why this is the way successful public bus services operate internationally.”

Passengers and employers whose staff make use of GO GEORGE are welcome to call the GO GEORGE call centre (0800 044 044) or contact the team via Facebook or Twitter for more information.

With 35 GO GEORGE minibuses joining the bus fleet on 23 August 2015, some welcome refinements to the routes of the first two phases that had been rolled out, will be implemented on the same day.