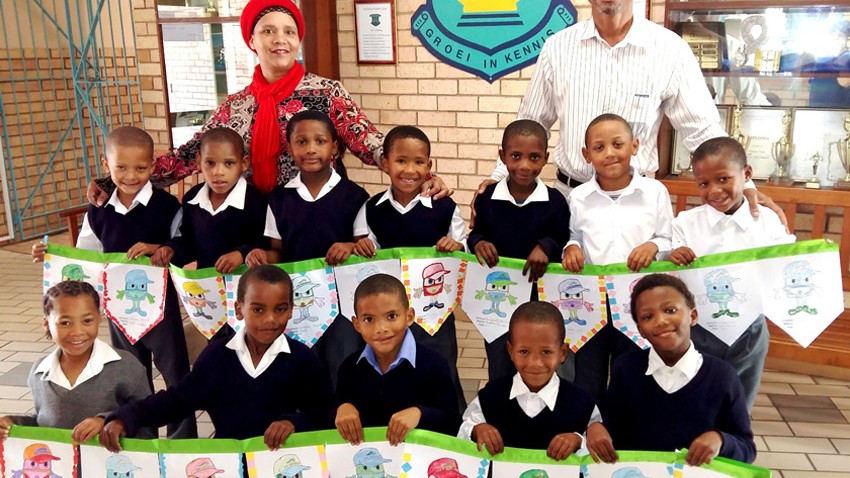 The launch of the George Integrated Public Transport Network (GIPTN) on 16 October 2015 was a memorable event for the special guests and stakeholders in the project, not only because it celebrated the achievement of goals and dreams, but because the community’s involvement in the festivities confirmed their embracing of the city’s very own integrated bus service.

A few weeks before the event, specially created colouring-in pictures were distributed at primary schools in the area where the next phase of the bus service will be rolling out. The youngsters from Conville, Mzoxolo, Parkdene, Thembalethu, Tyholora and Heidedal Primary Schools accepted the invitation to help the organisers decorate the hall for the VIPs and ministers, and did indeed come to the party with their colourful works of art and drawings. Premier Helen Zille specifically made mention of the children’s beautiful decorations.

“We were delighted to receive hundreds of the most beautiful pictures back from the schools” said James Robb, GO GEORGE manager. “And it warmed our hearts to hear the little ones ask, wherever we went, when ‘their buses’ would be coming to their street or suburb.”

According to the Executive Mayor of George, Alderman Charles Standers, “the learners of George was identified as one of the prime segments of the local population who deserved an affordable, safe and dependable bus service to transport them to school and extracurricular activities on time.”

From Thembalethu, the Siya traditional dancers were first in line to welcome guests upon their arrival at the Conville Civic Centre and set the stage for the rest of the morning’s joyful program.

At an event of this magnitude, of course the National Anthem would have to be sung, accompanied by professional musicians. The GO GEORGE team approached the Nelson Mandela Metropolitan University and was most fortunate to secure the glorious Wind Symphony Orchestra, directed by Gareth Williams. Along with Miranda Ncwane and Xolisile Jack from the university, Debby Williams, administrator at the George Municipality’s civil engineering department who is also a talented singer, caused wide-spread goose bumps as they led the guests in singing. The orchestra went on to entertain guests with light music during lunch.