GO GEORGE looks back on first year of milestones 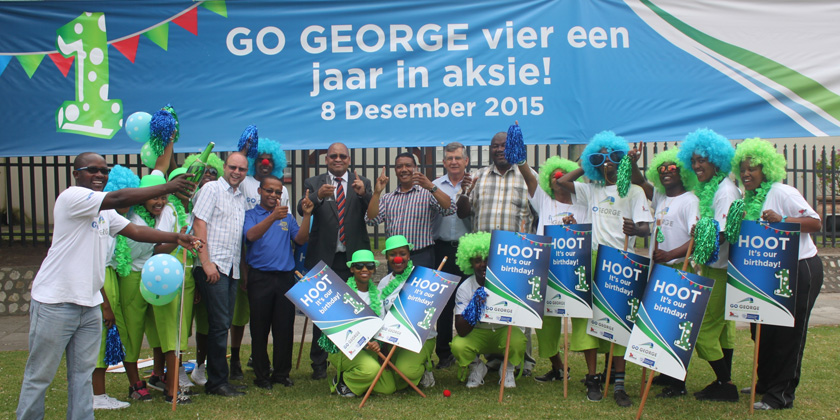 GO GEORGE celebrated the bus service’s first birthday on Tuesday, 8 December – one year after the first set of routes were rolled out to Rosemoor, Loerie Park and Denneoord on 8 December 2014. Banners at strategic points in town remind the community this week that the City of George has every reason to be in a festive mood.

To contribute to the joyous occasion, young EPWP interns working for the George Municipality were deployed along several main routes, dressed up in bright GO GEORGE colours, carrying balloons and placards with birthday messages on Tuesday.

Passengers also shared in the joy with 100 free bus tickets having been handed out by means of lucky draws during the course of the day.

The Executive Mayor of George, Alderman Charles Standers, thanked the project partners in this “mammoth, ground-breaking public mobility project”. He also congratulated the committed staff members who worked diligently to make the city council’s vision possible. “The vision is one of accessible transport – of families, women, children and persons with special needs who are able to move safely and affordably between their homes, work, schools, colleges, sports venues, places of worship, shops and socialising spots. This vision is now becoming our reality,” he added.

Standers pointed out that the subsidised bus fares ensure more disposable income for household basic necessities, with savings of R1 million having been calculated in the first six months of operation when comparing bus fares to the cost of other transport. “Add to this the vast variety of job opportunities that came with preparing and maintaining the infrastructure for the bus service, it is clear that GO GEORGE is forever changing the face of public transport and socio-economic opportunities in George.”

According to James Robb, GO GEORGE Manager, the highlights of the past year definitely overshadow the negative moments. “The first year of establishing a service of this magnitude will always have its challenges, of course, but when looking back on what we have achieved and the extent to which George residents embraced this project from Day 1, we are deeply grateful for how far we have come,” he said. “To hear about people who were able to take a job on the other side of town because they can now take a bus to work, or about a family who’d gone for an outing to the Garden Route Mall for the first time ever – those are the heart-warming stories that make us determined to get the service to the rest of town as soon as possible.”

Some milestones of the first year include:

By November of this year, 14 routes, 91 buses and 175 drivers were operational, and 250 000 passengers were being transported monthly.