Manna for today, and wheels… 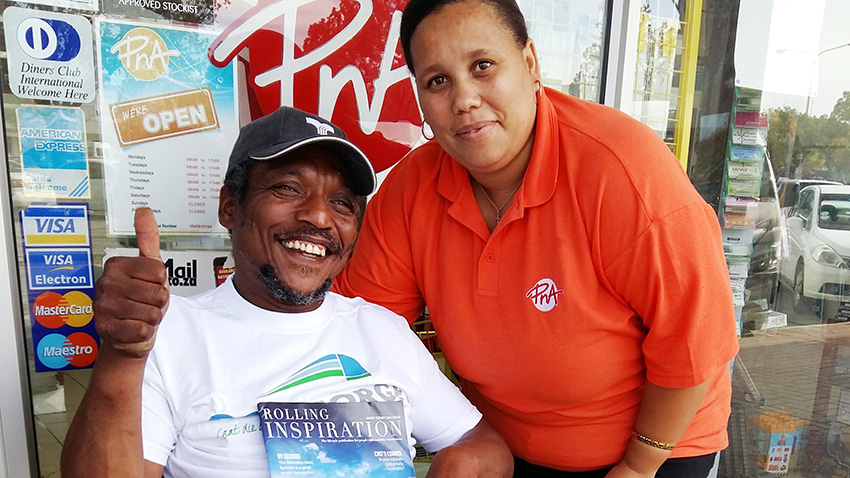 Carlo Zietsman of Rosedale is the grateful and proud owner of a brand-new wheelchair donated to him by die QuadPara Association of SA. Here he proudly shows off the Rolling Inspiration magazine picturing him with the GO GEORGE minibus on the cover. Janine Abrahams, a cashier at PNA in York Street, helped unpacking his wheelchair when it was delivered to the shop a few weeks ago and says the shop’s staff were as excited as Carlo himself.

Some days the day’s proceeds scarcely buy a bread for Carlo Zietsman (42) of Rosedale and his family of five. On other days, he can buy a nice bag of foodstuff at Shoprite before taking the bus home. And then, one day, it seems as if the Lord is smiling extra broadly upon you and an unexpected, huge thing happens.

The cerebral-paralysed Carlo is a well-known face in front of PNA in York Street where he’s been sitting in his wheelchair since the turn of the century, receiving contributions from passers-by. When Rolling Inspiration, the lifestyle magazine of the QuadPara Association of SA (QASA), approached GO GEORGE earlier this year for information and help with a cover picture for the edition in which they would report about GO GEORGE’s accessibility for disabled people, Carlo’s name immediately came up. He is a regular bus passenger and as everybody knows where to get hold of him, he was asked to be the model.

Quite surprised but willing, Carlo went along to the bus depot, all dressed up in a new GO GEORGE t-shirt. All went well with a professional photographer behind the camera and everybody looked forward to seeing how the model and GO GEORGE’s unique minibus would adorn the magazine cover. What nobody had been expecting, was an email from Ari Seirlis, CEO of QASA, to say that they would like to give Carlo a new wheelchair.

“When QASA saw some photographs of him in his wheelchair, we could see immediately that his wheelchair needed to be replaced and so we made this commitment to him,” says Seirlis. “To determine his specific needs, the QASA wheelchair application form was sent to a facilitator in George to complete on his behalf so we could identify the correct seating. Carlo’s ideal wheelchair was then delivered to George from Cape Town a few weeks ago.”

Louis Fourie, owner of PNA, says he bought the shop in 2005, and got Carlo included in the deal. “It has never crossed my mind to ask him to leave; as a matter of fact, when he is not here, people come in to enquire about his whereabouts and well-being.” On the day that the wheelchair was delivered to Carlo’s “business address”, Fourie was out of town, but the shop assistants were as excited as Carlo to help open the huge box.

“I was so grateful,” says Carlo. He is a soft-spoken man, but smiles broadly. “My wheelchair was so worn out that I thought to go to the hospital to enquire about getting a new one. And then I got these smart wheels! It is so compact and can get in anywhere, and folds up quite small so that it can easily be loaded into a car. My laaitie Realto who fetches me here in the afternoon after school, also says it is so light to the touch.”

Carlo originally hails from Greyton, but has been living in George for the past 16 years, where he also met his wife Felencia while both working on a missions project. They have four children and are hard pressed, since Felencia is medically unfit to work as well. “But this is my place and my people now. Everybody knows me and is good to me. I park here in the morning, having nothing; but tonight I can take home a little something. I can never thank everybody enough.”

Previous ArticleFare evasion is at cost of service to you