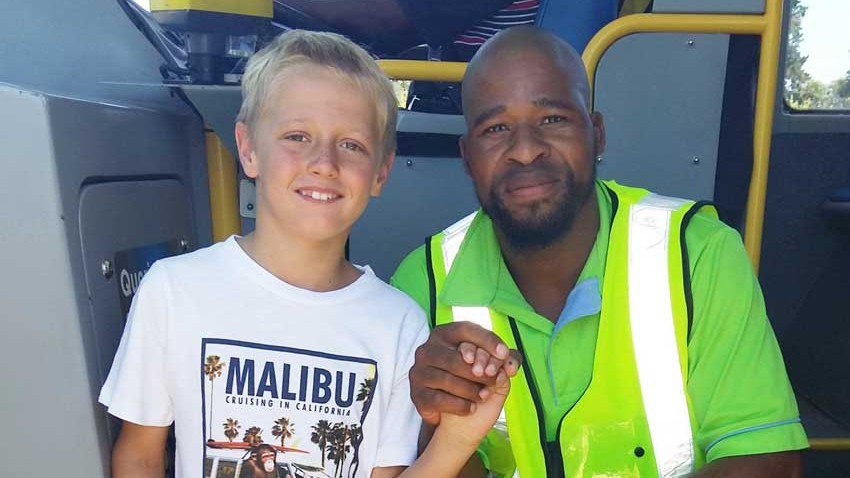 Like the Biblical good Samaritan, a GO GEORGE bus driver recently set his mission aside for a moment to show compassion to someone in need.

Smiley Bhumka’s nickname did not just fall from the sky. This friendly bus driver was on duty on the Blanco route on a Saturday recently when he saw a young boy who was clearly upset and injured, sitting on the sidewalk in Voortrekker Street with his damaged bicycle next to him. As there was no adult on the scene, Smiley stopped as soon as was safely possible to see if he could help. “I thought if I could only call his parents, I could go on with my schedule without causing the bus to be late,” he said.

Matthew Zander (9) had not only fallen from his bicycle, but had been hit lightly by a huge passing vehicle which not only left him bruised and scratched, but also in shock. He was on his way to a family friend just round the corner, with the permission of his parents who would soon follow by car.

“Matthew says he had heard the huge vehicle coming along and for that reason drove as closely as possible to the sidewalk, but could not avoid being hit,” says his mother, Riana Zander. “The driver stopped and asked whether he got hurt, and drove off when Matthew said he was okay.”

The Zanders had a huge fright as they came upon the scene with the bus, its driver and their upset son. “When we realised that the bus driver had stopped to assist and calm our son, we were so grateful and relieved. This was way above and beyond his duty and we appreciate his attitude and assistance endlessly. We want the people of George to know about this exceptional GO GEORGE employee.”

Matthew’s bike was damaged badly in the accident and is in for repairs. Since the bicycle was not stolen or damaged on the owner’s premises, their insurance is not paying out for damage or repairs.