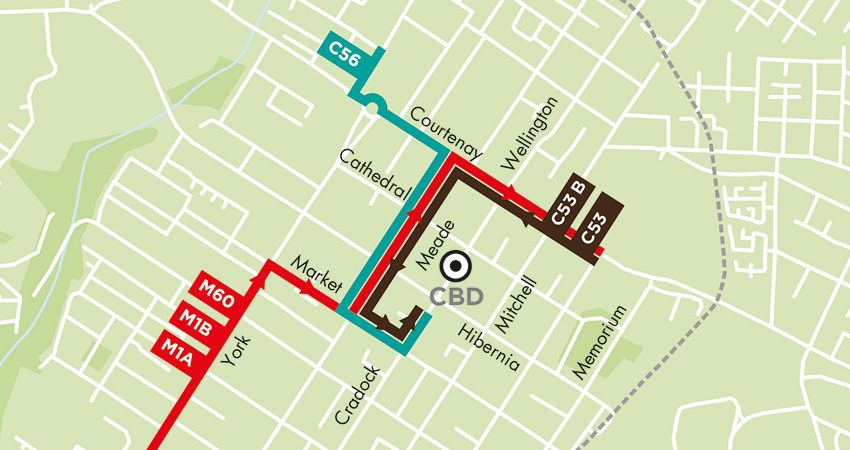 GO GEORGE will be making certain adjustments to routes to accommodate the annual George Lights Festival this coming Saturday, 3 December 2016.

York Street will be closed between Hibernia Street and the circle in front of the George Museum from 12:00 till midnight on Saturday, with the Denneoord, Rosemoor and Pacaltsdorp routes consequently cutting out that part of York Street, and the Cathedral A stop.

Coming down Caledon Street, Route 56R Denneoord (anti-clockwise) will turn left into Courtenay Street, travel through the circle and turn right into Meade Street instead of York Street, where it will turn left into Market and along its usual route to the CBD. The forward (clockwise) route will follow the same route back to Denneoord.

Rosemoor routes 53 and 53B will turn left into Meade Street instead of York Street as it comes up Courtenay Street, left into Market Street and on their normal route to the Rosemoor stop in Cradock Street.

Routes 1A, 1B and 60 from Pacaltsdorp will turn right into Market Street from York Street, instead of travelling right up to circle, left into Meade Street and right into Courtenay Street, following their normal route from there on.

Residents are encouraged to make use of the bus service to attend festivities in York Street and at Unity Park. The closest stop for passengers from Pacaltsdorp would be the York C stop next to Protea Pharmacy in Market Street. Rosemoor passengers can disembark at the Wellington stop in Courtenay Street (next to George Preparatory School), while Denneoord passengers would be closest to the festivities if they get off at the George Library stop.

Please take note, however, that the buses will run according to their normal Saturday schedule, and that the last trips of the day will depart before the end of the festival, which is at 22:00.

For any further enquiries, please call the GO GEORGE Call Centre at 0800 044 044 or send an email to info@gogeorge.org.za.