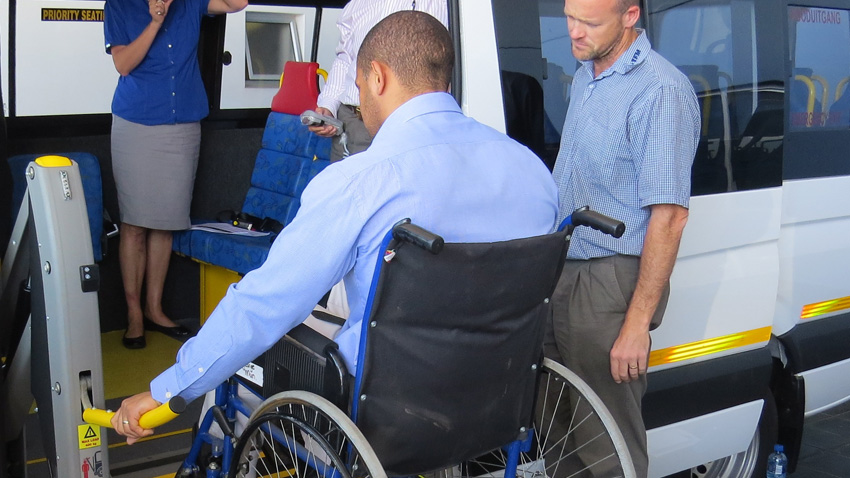 The GO GEORGE project has achieved a monumental national milestone with a first-of-its-kind innovative approach to ensuring that all buses used are fully accessible to persons with special needs – in other words easy to board and accessible to all persons such as the aged, frail, pregnant women, women with young children and those persons with various disabilities. GO GEORGE is all about ensuring “equality of movement” – regardless of physical status and universal accessiblity is a legal requirement of all new public transport operations across South Africa. One of the biggest challenges for the GO GEORGE system has been that South Africa currently has no manufacturers that produce mini buses which offer this feature.

George Municipal officials with the Civil Engineering Directorate (Jacques Quinot, Senior Manager: Streets and Stormwater and Lionel Daniels, Manager: Infrastructure and Project Management) were instrumental in developing an acceptable solution which has been incorporated into the manufacturing process by Mercedez Benz. Two prototypes were produced; one with a manual ramp and the other with a hydraulic lift which can lower to street level and lift up to 200kg while being operated by the bus driver.

The official inspection by the Department of Transport on the two proposed prototype mini buses has lead to the acceptance of the hydraulic lift design option and ultimately the approval of the accessibility functionality for the GO GEORGE mini buses by Ms Amanda Gibberd, Director: Universal Design in Public Transport, National Department of Transport. The hydraulic lift design option involves the redesign of the minibus vehicle to provide access to the vehicle from the front passenger door, while incorporating the hydraulic lift next to the automated side sliding door. A wheel-chair bay with flip-up seats is provided on the bus.

The National Department of Transport is currently developing a standard set of universal accessibility minimum requirements and guidelines for all new vehicles and infrastructure such as bus stops and termini, in line with the United Nations Convention on Human Rights and the South African Constitution. In achieving this milestone, GO GEORGE will be the first public transport network in South Africa to successfully achieve full accessibility across its entire vehicle fleet.

The Executive Mayor of George, Charles Standers and members of his MAYCO team joined the inspection visit and viewed the prototype adapted minibus developed. “These vehicles will assist the visually and hearing impaired as well as physically disabled, elderly and mothers with young children. We are very proud that our Civil Engineering Directorate played such an important role in solving the dilemma we faced and once again George Municipality has achieved a first. GO GEORGE is a project for all of the citizens of George and will play an important role in improving the quality of everyone’s life.”

Previous ArticleGO GEORGE on its way