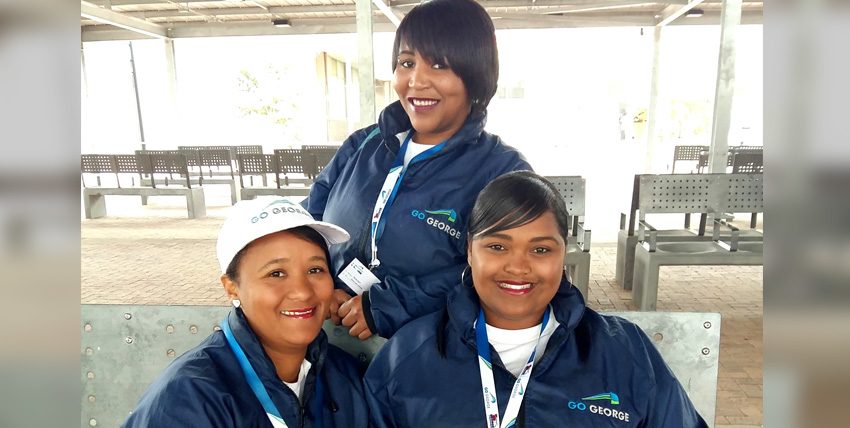 “We love our job!” these three GO GEORGE Champions said when they were commended for their professional conduct in extraordinary circumstances. Seated, from left, are Patricia Jacobs and Meloney Frans, with Alicia April at the back.

Although the GO GEORGE Champions mainly assist passengers to understand and effectively use the bus service, unexpected situations sometimes arise and then these passenger care officials need to think on their feet.

When Alicia April, Meloney Frans and Patricia Jacobs recently boarded the 19:00 bus to New Dawn Park to accompany passengers home from the CBD, they did so for the first time. This time of night, they usually service the City Loop and Garden Route Mall buses that deliver passengers to connecting routes. The bus just entered Pacaltsdorp when a young passenger requested the driver to stop as soon as possible.

It turned out that the young man had been sensing an epileptic seizure coming on, and wanted to get off the bus. As he stepped out onto the bus stop, he fell to the ground. All three of the Champions on board happen to have family members suffering from seizures too, and subsequently knew what to do. While one informed and calmed down the passengers who were eager to get home, the other two turned the patient on his side and made him comfortable. Since they had been informed about what was going on, the passengers were sympathetic and passed on sandwiches and cooldrink for the patient while waiting for an ambulance to arrive.

It is GO GEORGE procedure for the bus driver to inform the control room about such incidents, so that they may request medical assistance immediately. He is not allowed to leave the scene and his passenger before official assistance arrives. “We believe we boarded that bus for a reason not known to us when we did so,” says Patricia.

“I was quite calm and knew exactly what to do,” says Alicia. “My sister gets seizures and one must just stay calm and be with them until it is over.” “And because we were there to explain to the passengers why the bus could not depart immediately, the situation was dealt with in a professional way, with everybody waiting patiently and being supportive,” says Meloney.

The team of Champions is a division of the GO GEORGE communications team who commended the three ladies for handling the situation in a most professional way, and with compassion.